Doctor Who Cocktails For Your Wedding

With the up and coming release of the new season of Doctor Who and the new 13th Doctor starring Jodie Whittaker, we thought it would be fun to bring out a list of Doctor Who Themed Cocktails for your wedding. Whether you or your partner is are Doctor Who fans you can easily add these drinks to your wedding if you wish (or at home). What’s great about these cocktails are that even if your guests do not understand the Doctor Who reference they all taste great. They can be an obvious or subtle or Doctor Who reference. 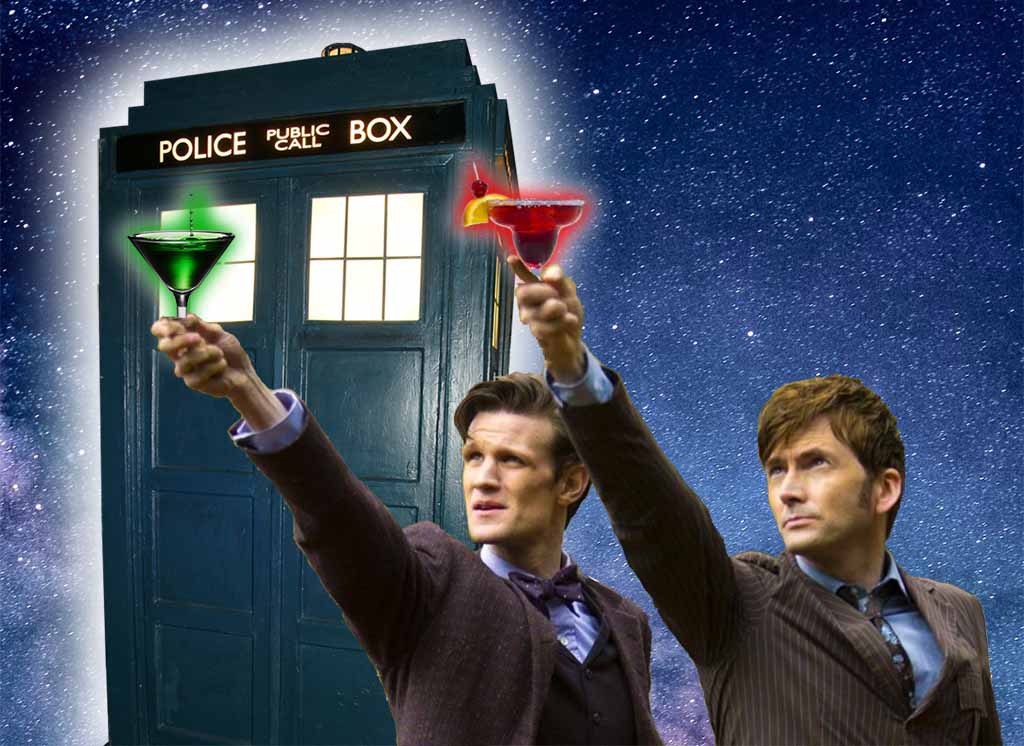 When the 11th Doctor regenerated, he met a young Amy Pond. He was hungry and did not know what he liked to eat or not. As he says “new mouth new rules”. So all through the night, they tried to find something he liked. After hours and hours of trying many and many things they finally came across one thing he could stomach… ‘FISH FINGERS & CUSTARD!’. It became a recurring gag during the 11th doctors time on the show in occasionally referencing ‘fish finger and custard’. As far as Doctor Who cocktails go, this one does have the weirdest name but not a bad taste.

Crush the graham cracker (one per cocktail) to a medium / fine granularity. For ideal results, you should sift out all the fine cracker particles. This is to look like ‘breadcrumb’ from the fish fingers when it was on the tv show.

Mix the Butterscotch Schnapps, bourbon, vanilla flavoured vodka and eggnog. Sprinkle crushed gram crackers over ingredients. Prop 2 fish-shaped chewy candies on the glass for the fishy finish! Traditionally this doctor yelled out “GERONIMO” before leaping into actions so one should yell this out when they are about to have this drink!

Alternative: You could just get the bartender to pour custard into a glass then put a fish finger into the cup. This may however confuse and / or disgust people. Only the most hardcore of fans would appreciate it, but even then would they like it?

The Doctor Trying Fish Fingers and Custard For The First Time

The one villain/enemy of the Doctor that has stood the test of time is the Dalek’s. It is the one enemy that the Doctor can not reason with and hates everything that is not Dalek. Hideous creatures encased in an advanced metal protective case. Even a single touch from a human will cause the Dalek to want to commit suicide as it has been contaminated by the mere touch. So fierce that the Doctor had to ‘time lock’ his own civilisation with them so that they would not destroy the universe.

It, therefore, stands to reason that The Exterminator is one very strong cocktail. It is also the strongest cocktail on our Doctor Who Themed Cocktails list. Be forewarned that if you take on this drink, you may not stand a chance!

While a very potent drink, making it is relatively simple to put together. Pour all the ingredients into a mixer with a handful of ice and shake well. Can be served on ice or blended in. If you wish you can add a cherry or pineapple for garnish. Personally, I would rather use these awesome Dalek Tumblers pictured below 🙂

Please Note: Unlike The Cybermen cocktail listed below, out of all the Doctor Who Cocktails, we do not recommend upgradings this one. It is already very strong and sometimes your ‘hardware’ just can’t handle the upgrade.

The Doctor without his sonic screwdriver is just unheard of. This device has been a long-standing aid to the Doctor since 1968. While only used three times by the second Doctor and more and more later in time.

Without getting too technical (or sci-fi nerdy), it is a multi-functional tool. The abilities of the Sonic Screwdriver include (but are not limited to #LawyerTalk)

Fun Fact: The sonic screwdriver was written out of the series in 1982 due to it being perceived as being too limited (seems ironic with the above list). However, in the 1996 telemovie, it had reemerged and has to stay strong with every incarnation of the Doctor since then.

Fill a 360 ml glass with ice. Pour the Vanilla Vodka, Blue Curacao, and lemon-lime soda over the ice. I must stress to only use lemon-lime soda that is clear, you do not want fruity bits in your cocktail. Stir and enjoy. An interesting drink in that the sonic screwdriver is very versatile and simple to make. Please note that if you drink this cocktail it will not give you all the powers/abilities listed above 😉

The Cybermen – You Will Be Upgraded

A race of cyborgs that have no emotions and are on a quest to ‘upgrade’ humans to join their army which are called Cybermen. In many ways, they are like the Borg from Star Trek (try out their Borg Queen) in that they are trying to assimilate others and constantly upgrade themselves through the use of technology. Their unrelenting pursuit of trying to upgrade everyone constantly has made them a longstanding and fearful enemy of the doctor.

To start off, you should put the mint, agave nectar and lime cordial into a glass or even a mixing bowl. Muddle the content well / vigorously. Add the rest of the ingredients into the bowl. Fill a mixer until it is around three-quarters full with ice. Take the content from the glass/mixing bowl and pour into a Collins glass. Add mint and lime garnish and prepare to be ‘upgraded’.

Additional Upgrade: If you want to ‘upgrade’ this Doctor Who Cocktail – simply add an extra shot of tequila.

Did you know the Doctor had/has a wife (all this time travel stuff can get confusing)? Her name is River Song and is the daughter of Amy and Rory (companions of the 11th doctor). Because she was conceived on the Tardis while it travelled through the time vortex she was born with the same abilities and genetic traits to that of the Doctor. In essence, she is part Time Lord and part Human. She is the complete polar opposite to the doctor in that she is more extroverted and more likely to take action. Whenever she greets the Doctor she always says “Hey Sweetie”,

The Doctors people are from a planet called Gallifrey which has 2 suns. It was the Doctor who time locked his own people (The Time Lords of Gallifrey) alongside the Dalek’s. This was because it was the most powerful war ever waged and no matter who won it would have been the end of the universe. The universe was at peace for many years until the Time Lords found a way to escape their time prison and enter back into the universe. This cocktail is for the Gallifrey people who nearly escaped to become the greatest threat to the universe. It is also a reference to the planet having 2 suns.

Fill a tall or Collins glass to the top with ice then pour the pineapple and lime juice in. Fill the remainder of the glass with orange juice then slowly stir. Next, slowly pour the grenadine into the glass and let it sink to the bottom. Put two orange slices on the edge of the glass to symbolise the 2 suns of Gallifrey and their symbolic rise back to power. Sip with care and stare into the sunset (your drink).

From time to time there is a new Doctor which is always sad to see the old one go but excited to see the new one arrive. Each time this happens the Doctors body bursts with an amazing amount of energy that almost resembles fire. This Doctor Who Cocktail celebrates the moment the doctor regenerates from the old into the new.

Pour all of the listed ingredients into a cocktail mixer. Fill with ice and shake… shake like your bursting with energy! Pour the contents into a tall or Collins glass and top with ice. Take a sip, feel the energy pulsing through your body and regenerate!

The Doctor travelled in what appeared to be a blue time travelling police box. Turns out it was actually a TARDIS which stands for – Time And Relative Dimensions In Space. besides being able to travel anywhere in space and time, it also has a chameleon circuit which means it could change shape to match its surroundings. So if it was in medieval times, it could turn into the shape of a hut or if it was on a modern day construction site, it could turn into a port-a-loo to blend in. Unfortunately, early on in the Doctors adventures, the chameleon circuit broke and the TARDIS is permanently stuck in the shape of the now iconic blue police box.

Grab a cocktail shaker and pour all the liquid ingredients into the shaker and strain into a cocktail glass. Add the orange or lemon wedge to simulate a sun that you are travelling past. Also, garnish with edible gold stars from food stores. Alternatively, you can use gold flake vodka so the stars are in the drink (but this is not as commonly available).

Pour all the ingredients into a mixer and shake, strain into a shot glass.

Doctor Who Themed Cocktails – There Are Plenty More

This list above was just a handful of the Doctor Who themed cocktails out there. Feel free to use this list, find other Doctor Who Themed Cocktails or simply add your own personal twist. Remember the wedding is about the two of you and if it includes your love of Doctor Who, then that’s great.

Check out our other wedding-themed cocktail blog guides:

Which of these was your favourite Doctor Who Themed Cocktails? Is there a Doctor Who cocktail you feel we left off the list? Would you use any of these Doctor Who themed cocktails at your wedding? Let us know and join the discussion down below 🙂